US Crude Output Hike Cause of Oil Price Slump: Iran 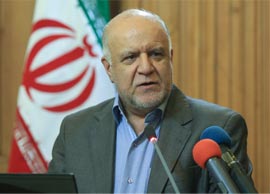 Iranian Minister of Petroleum Bijan Zangeneh says the unexpected rise in US crude oil output has been the reason behind falling oil prices in the market.

Speaking following a cabinet meeting on Wednesday, the official told reporters: “We are in talks with members of the Organization of the Petroleum Exporting Countries (OPEC) but it would be a difficult task for the members to become prepared for a decision [to tackle the downward trend of prices].”

He said the US has increased its output by 0.9 mbd which is beyond OPEC expectations.

Describing any decision by OPEC members for reducing the group’s collective output as difficult, Zangeneh said, it is still too early to expect the cut plant to bear results in the market, so “we must wait and see the results of the initiative.”

“Curbing production has always been a difficult task in OPEC,” he added.
[ssba]
Related Post...