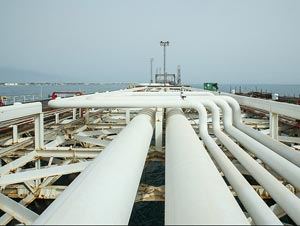 The managing director of Iranian Oil Terminals Company (IOTC) says Khark Oil Terminal can load up to 8 million barrels per day of oil on vessels now that it has 9 active docks.

Mousavi also said that Iran exports 70 to 75% of its crude oil by Iranian tankers possessed by the National Iranian Tanker Company.

He said vessels traffic has been rising at the terminal since implementation of the Joint Comprehensive Plan of Action (JCPOA) in January 2016.

The official also said that energy giants like Total, Eni, and Lukoil also send their tankers for loading to the terminal.
The terminal sent 240 million oil barrels in the Iranian calendar year of 1395 which ended on March 20.